A year after having visited it far and wide and having had the opportunity to spend many more months traveling while working, I believe that this island is the best place I have visited so far to spend a period working in the meantime. The right mix of nature, tranquility, nightlife, sea, mountains, countless activities to do and a strong presence of a community of remote workers make stays in Tenerife inevitably full of emotions and impossible to spend getting bored.

If you can take the job with you and you haven't jumped here yet, it means that you are doing something wrong! Fortunately, you can fix and organize your next workation by reading this guide and immediately booking a low cost flight that will take you to a small paradise a stone's throw from Europe.

Introduction to the island

But what is special about this large island nestled in the Atlantic Ocean that attracts so many people from all over Europe? Perhaps it will be what most people say is the best climate in the world? 🔗 Perhaps the abundance of completely different landscapes that characterize the island? Or the possibility of practicing a great deal of water and outdoor sports all year round? The answer is that all these, plus other reasons, make the idea of arriving here to spend a few weeks or even more in total relaxation particularly attractive!

One of the things that amazed me the most is the huge amount of microclimates that characterize this place: you go from the mild and dry climate of the south to the rainy and cool one of the north in about an hour by car. In the winter months it is not uncommon to see the highest volcano in Europe, Teide (3,718 meters), overlooking the island with its snow-capped peak and the thing is even stranger if in the meantime we are taking a bath in the warm waters of the ocean. Despite this, it is difficult to feel cold and a simple jacket will be enough for us to explore the island in peace. Personally I had no difficulty getting everything I need into a 40l backpack.

If kilometric beaches and the Teide National Park recognized by UNESCO as a World Heritage Site were not enough, the presence of numerous small and large urbanizations make the exploration of the island interesting also from a cultural and historical point of view!

In the following we will analyze the various areas and we will understand how to move also based on what our objectives are.

From what has been said so far, it can be understood that the choice of the area in which to stay is fundamental and will also greatly affect the price we are going to pay. So let's try, using the map below, to understand how the island is divided so as to make a more thoughtful choice that will make us appreciate our stay in Tenerife even more. 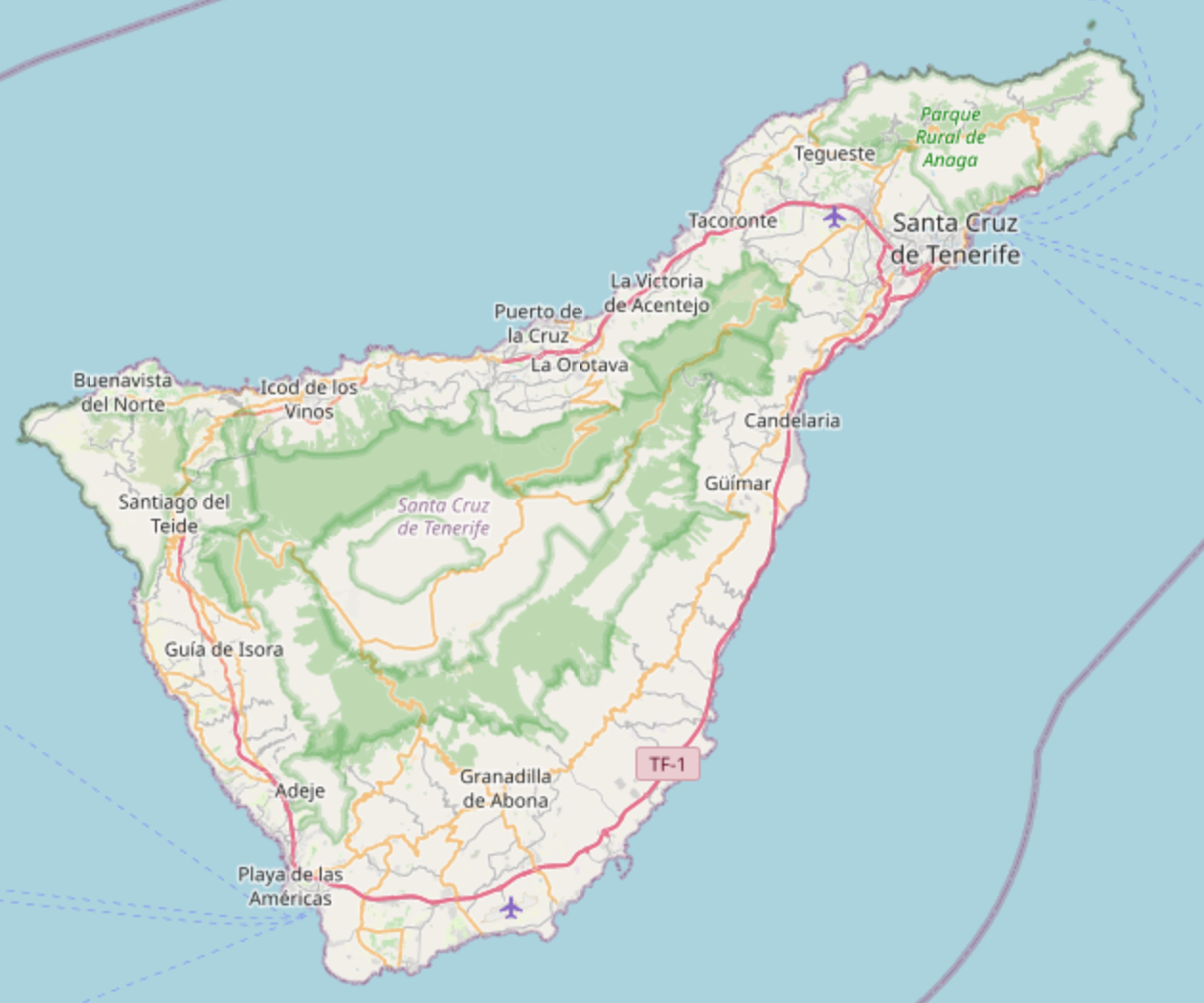 Let's start from the location of the airports (yes there are 2 of them!):

Staying on the transport theme, the one you see highlighted in magenta is the TF-1 highway which connects the whole island and is almost a complete ring. The last piece that will connect Puerto de la Cruz to Santiago del Teide is still under construction! Using this road you can easily reach every corner of the island and the limit is 120 km/h. Ah, don't forget that there is no toll so you can use it as much as you want!

Finally, let's move on to describe the various areas:

The question that now arises is: which one to choose? If you have read carefully the answer is quite obvious and it depends entirely on your interests. I have chosen to spend most of the time in the south given the always favorable climate and the ease of networking but you might be more attracted to the more authentic Tenerife in the north! Certainly, whatever choice you make will lead you to experience the island in a different and very personal way.

We have covered far and wide the areas where you can stay but we have not said much about the choice of accommodation. You are here to work as well as to spend a nice holiday and this means guiding your choice also based on the internet coverage and the services that could make you comfortable during a working day. Maybe you are more of the hostel type who prefer to spend a little less on accommodation and work more often from a coworking or a bar, or you prefer a more equipped and larger accommodation that allows you to find the tranquility and concentration you need. Whatever your needs are, you won't have big problems finding the one that's right for you!

The platforms I prefer for research are mainly two: Facebook and AirBnB. The latter offers a wide choice and goes from single rooms to entire apartments moreover, in one of the latest updates of the platform a very interesting feature has been introduced called "Verified Wifi", which allows host to show the actual internet connection speed of the accommodation you are selecting. On Facebook there are numerous groups for finding accommodation and some are frequented exclusively by compatriots resident or not on the island who can facilitate our search and direct us towards solutions that will also save us a little. The warning is that here clearly there is no protection provided by a platform like AirBnB and therefore you have to pay some extra attention to any scams or misconduct on the part of hosts.

The costs are extremely variable and depend mainly on 3 factors: the area, the period and the type of accommodation. In the period of February 2020, I managed to stay a month taking around 350 euros for a room in a shared apartment but I know of others who hopefully have up to 1000 euros per month for apartments or rooms in very central and touristic areas. With a little research, you will surely find what is right for you.

At this point you have understood how the island is structured and you are able to find accommodation that meets your needs. You are now ready to enjoy your time in Tenerife by filling it with activities of your interest! I will try to compile a list of the best activities to do while later I will bring you back the places not to be missed and that you absolutely must visit during your stay.

I could go on for hours given the amount of experiences you can live in Tenerife but I just bring you some other ideas that you can use to plan your holiday without going into too much detail: quad bike ride, whale watching, paragliding, visit to parks fun like Siam Park and much, much more! Even just organizing it will be quite fun even before you leave 😁

Here are some photos I took during the activities I did in Tenerife!

What does it mean to come to this island as remote workers? Can we expect to "network" as in other destinations more frequented by this category of people? Probably before the appearance of the covid the answer to these questions would have been a bit different as the community on this island was a little less developed than in neighboring Fuerteventura and Gran Canaria. At the moment it is difficult to walk along the Las Americas waterfront without meeting someone with a PC in front of them intent on writing code, doing some calls or doing other types of work. Walking through the streets of El Medano, on the other hand, the language we will hear most is English and not Spanish as we might imagine. Even in slightly less conventional places like Puerto de Santiago near the monumental mountains of Los Gigantes, I was able to meet people who had decided to stay there for their workation.

One of the things that struck me most is the ease I had in interacting with the community and the tools that helped me were basically two:

These two sources are quite international and allow you to get to know the most disparate people from every corner of Europe, but if you prefer to spend time with other Italians you will have no difficulty in doing so. There are numerous groups on the various social networks to agree but simply spend some time in the Los Cristianos area to start wondering if you are abroad or in some neighborhood of an Italian seaside city given the large amount of compatriots!

I conclude this part by talking about one thing that I have not been able to take part in and which I regret enough: they often organize "tandem" sessions of cultural exchange and in order to learn/improve their Spanish. In the Slack group that I have just recommended, there is a dedicated channel to take part in the various sessions and I advise you not to miss this opportunity!

Places not to be missed

We end the guide with the list of places that in my opinion are essential in drawing up the list of things to do in Tenerife. But keep in mind one important thing, a month is absolutely not enough to visit everything , much less a couple of weeks so my advice is to choose the places to visit and the activities to do according to your preferences or, at best, extend the length of your stay here.

Here is the list of must-see places in no particular order of importance:

Below I leave you some photos of the places mentioned above.

Would you recommend a working period in Tenerife? Definitely yes, the possibilities are endless and as I said in the introduction this island has been one of the destinations that I have most preferred in my recent travels!

What are you waiting for to book your trip?